The brief for this exercise is to look though your own family archives and find a series of portraits that have not been linked together before and use them to tell a story.

Looking though my family archives was an interesting activity in itself. There are 5 sections:

I almost never got onto doing the exercise!

I started by looking at the images of Hardman’s service chronotypes. I considered using my archives to replicate some of this as my father was in WWII. I have several images of him in uniform, and later images of him dressed much more informally. There is an extensive essay discussing the Hardman collection by Keith Roberts, which, along with issues about ownership of the images, and right to look at them, discusses the theories of nostalgia and how it can be evoked by looking at archival portraits. Nostalgia can be ‘reflective’ – looking at an individual history and ‘restorative’ looking at the past of a nation. (Roberts, 2015). My father died when I was young – age 8 and all I have of him are limited memories – but these are always sparked by looking at these photographs.

Lorie Novak, in her work Past Lives looks at at how images from her childhood, snapshots, bring back evocative memories and how important photographs of family members can become when the people are lost, either to death or simply missing and how we learn to understand both ourselves and the world through photographic images.

Valentin Sidorenko in Roots of the heart grow together talks about his extended family. He says ‘Family members died before I could get to know them, talk to them, love them. Years later I started meeting them separately via our family photo archive’. He collected family photographs and has collaged them together to show the links between different branches of the family. He says ‘I started with a photo album of my mom and dad, which they kept at home. I wrote letters to other relatives, and in the end, I got about a thousand pictures. It was like a detective story. I think it was one of the most exciting experiences in my life.’ (George, 2019).

I decided to concentrate on images of my mother, who is now 95 and very frail. This still left me with an impossible number of images.

So, I carried on selecting down:

At each stage I eliminated near duplicates.

This gave me a starting point. I have a recent image of her in a pensive mood. It is a ‘snapshot’ taken while she wasn’t looking at me and is very true to how she is now, in her chair, surrounded by blankets and scarves, next to her trolley with her essential items (pills, glasses, phone). I imagined her thinking back over time about important events in her life. I do not have pictures of all of these, for instance, I don’t have any pictures taken at either of her weddings. I don’t have a picture of her with my father, or with my stepfather. I don’t have any pictures of my grandparents – although I might be able to get these from my cousin.

I have a very early image, sepia toned, and poorly focused (probably because it is a photo of a scanned image of the original) of her age 4 and her two brothers (aged 3 and 2). It is composed with the 3 children standing in a line – although the youngest clearly was not co-operating. It was taken in 1928 in Germany – and this seemed a good starting point. I then chose an image of her holding myself at my christening. A formal image, with my mother in a suit and hat. The original image is small, black and white and there are several copies of it. Clearly it was an important day. Next comes an image of her holding her oldest grandchild (Alice) just after she was born. We have now moved on to colour. The picture was originally taken on colour film and has been scanned. The final image was taken in colour on a camera phone. The 4 images cross 91 years, a continent and 3 generations. I considered changing all the images to either black and white or sepia to reflect on the fact that they are memories – but decided to leave them in their original colours to both show the change of styles of photography over the time and also to imply  the more recent memories with the increasingly clear images. 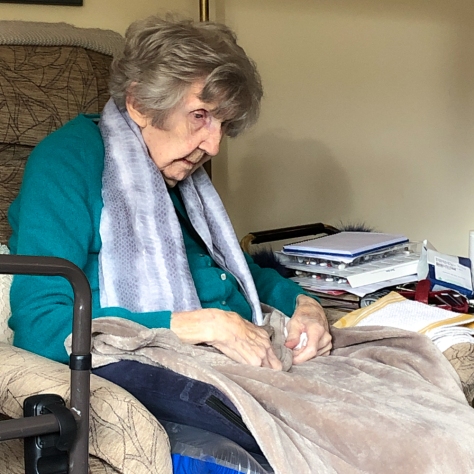 It is difficult to imagine my mother as a child. My memories centre around her playing with her grandchildren. In a longer exercise, with far more images, it would be interesting to include pictures of myself and Alice at much the same age as Oma, as she is known, as a child. I have printed the images and will take them to show my mother and ask her what she remembers about them.